Sea Lion Habitat will be temporarily closed for renovation. We hope to reopen soon and pardon for the inconvenience as we improve the area.

Sea Lions, along with Seals, and the Walrus belong to the family called Pinnipeds. Pinniped means fin, or flipper, footed.

Although commonly confused for one another, there are many differences between seals and sea lions. Sea lions have large fore, or front, flippers that when on land are used to push themselves up off of the ground. These fore flippers paired with their rotating hind, or back, flippers are what allow sea lions to be able to move around easily in a walking like motion. Seals on the other hand, have short thinly webbed fore flippers that cannot support their body weight; and hind flippers that point away from their bodies and do not have the ability to rotate. This limits seals to hauling while they are on land, which looks much like a very large caterpillar. Although the ears of seals and sea lions appear different, both of these animals have a keen sense of hearing. Sea lions can be identified by their external ear flaps, while seals have tiny holes that are harder to see on each side of their head. 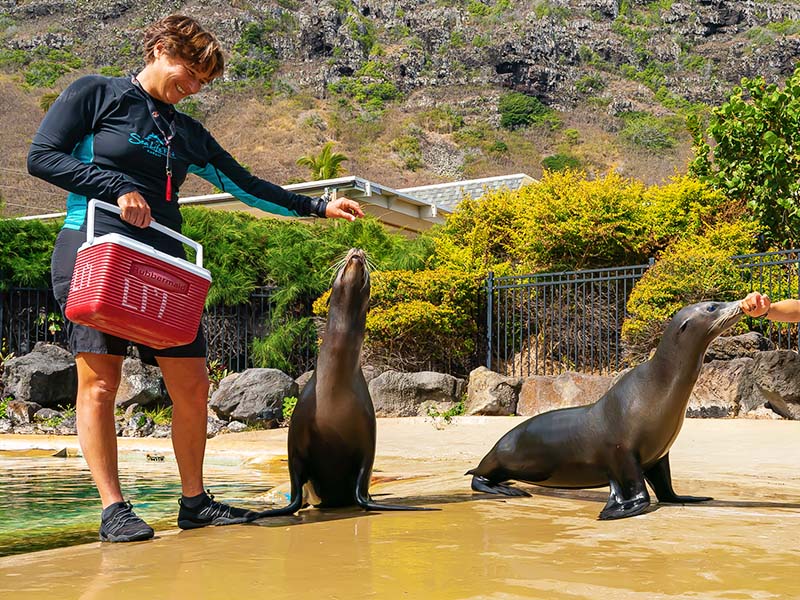 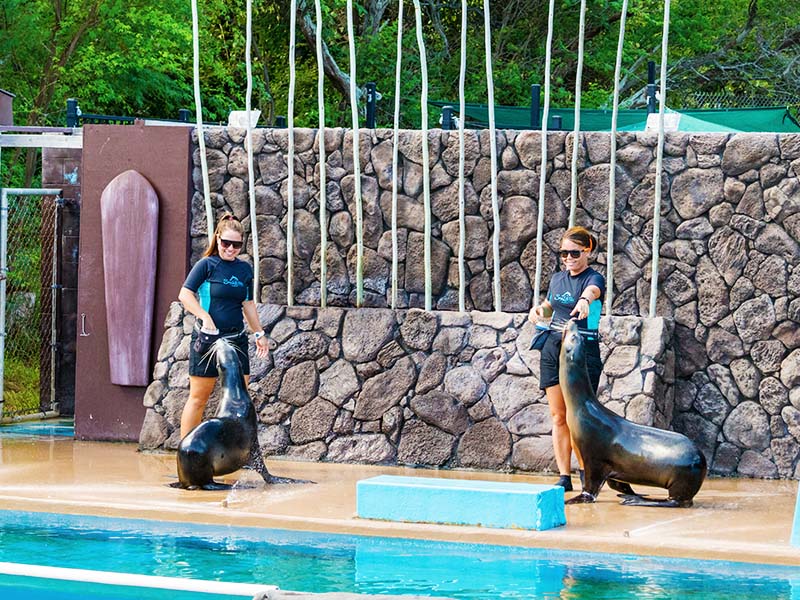 What Are the Characteristics of a California Sea Lion?

Have hair or fur: Their fur helps to keep them warm. Sea lions and seals molt, or shed their skin, once a year. When molting these animals will lose almost all of their fur, and grow a brand new shiny coat. Before molting their fur may appear to have a green tint, this is algae that sometimes get caught in between the hairs. The California Sea Lion habitat contains real ocean water. Sea Life Park pumps about 12 million gallons of fresh sea water through our habitats every day. We do not put any kind of chemicals into that water, so algae grow naturally in our habitats. These algae called diatoms actually absorb harmful sunlight and produce atmospheric oxygen.

Live birth: Seals and sea lions give birth to live pups. Females and pups communicate using vocalizations that are unique to the female and pup. Each pup and female has a unique scent that also identifies them.

Drink milk: Sea lions and seals utilize their blubber to help keep them warm besides their fur. In order to build up their blubber quickly, Pinniped’s milk needs to contain a lot of fat. A sea lion’s milk contains 33% fat.

Vocalization: Seals and sea lions sound very different. Sea lions are known to be quite noisy, and can even project loud barks. However, seals are known to be much quieter; in which they vocalize by using softer grunt and growl like noises.

California sea lions feed on fish and squid near the ocean surface, but can dive to depths greater than 500 feet. Their dives are usually about 3 to 5 minutes long, but sea lions may be able to stay underwater for about 15 minutes. Our California sea lions here at Sea Life Park are fed high quality fish which includes capelin and herring.

We train our sea lions by using positive reinforcement. The animals at Sea Life Park are trained for husbandry, which are medical behaviors that are used to better ensure that are animals are always in good health. The California Sea Lion is protected under the Marine Mammal Protection Act of 1972, but threats do include bycatch and entanglement in fishing gear, biotoxins from large algae blooms, and human-caused injuries. According to the National Oceanic and Atmospheric Administration (NOAA), there has been an Unusual Mortality Event declared in California. Since January 2013, there have been a high number of sea lion pups and yearlings stranding on the beaches in southern California. NOAA is still investigating the situation, but has stated that their evidence has shown that this event was not caused by a single infectious disease. Many organizations are hypothesizing that this event has been caused by the lack of food due to unusually warm water in the area. Some say that the mothers of the malnourished pups are foraging for food for extended periods of time; in which they are spending too much time away from their pups, and this is causing the pups to flee and fend for themselves. The Stranding Network rehabilitation facilities in the area are banning together to help take in and rehabilitate the stranded pups, and according to NOAA there is over a 50% survival rate. The pups being released are fitted with satellite tags, and the data from those tags show that those animals are surviving after their release. Another huge threat to this species is marine debris. They can get entangled in debris such as nets or fishing line; and they can mistake plastic for food, and end up eating the marine debris.