Cetacean are mammals that spends their entire life underwater such as whales, dolphins, and porpoises and they breathe air like you and I. All cetaceans have a pair of lungs that lead up to their blowhole(s) on the top of their head that they use to expel carbon dioxide and uptake oxygen from the air, unlike fish who have gills to catch the oxygen out of the water.

Another trait that makes a cetacean different from a fish is that cetaceans have skin and hair, whereas most fish have scales. Some cetaceans have hair on their heads as fetuses, but they don't always keep it. One great example is the humpback whale, which has golf ball-sized bumps on its head that contain hair follicles. Other examples include the right whale, which has hairs on its chin and upper jaw, and the bowhead whale, which has hairs on its lips, chin, snout and behind its blowhole. Cetaceans also give live birth and nurse their calves. An average gestation period for most cetaceans is about a year, followed by 2-3 years of nursing their calf.

They can regulate their body at a stable temperature no matter what the temperature of their environment. So whether they’re in the cold arctic waters of northern Russia, or warm tropical waters of Hawaii, their body is always regulating to around 98.6 degrees. Cetaceans can do this in a variety of ways. Most whales have a layer of blubber (fat) surrounding their body that works as an insulator in colder water. On the flip side, appendages such as fins and flippers have a large surface area to allow heat to leave the body at a faster rate to cool off in warmer waters. 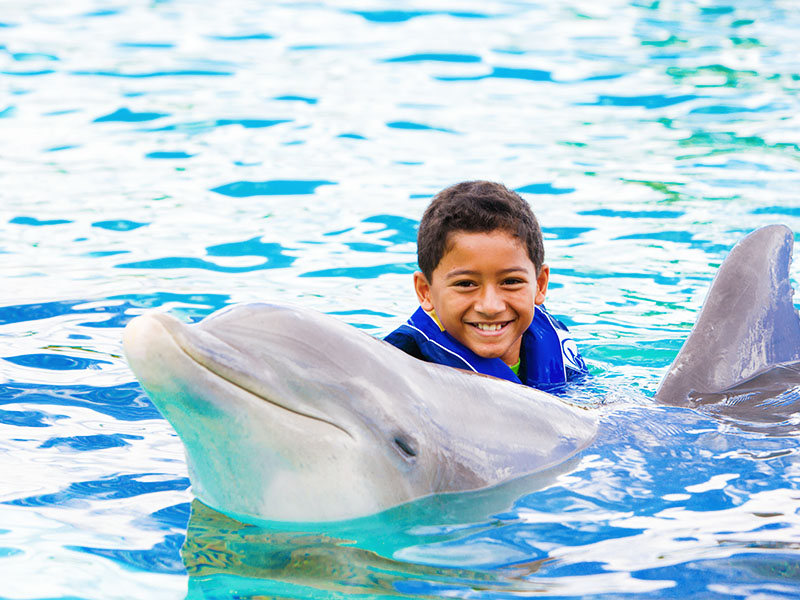 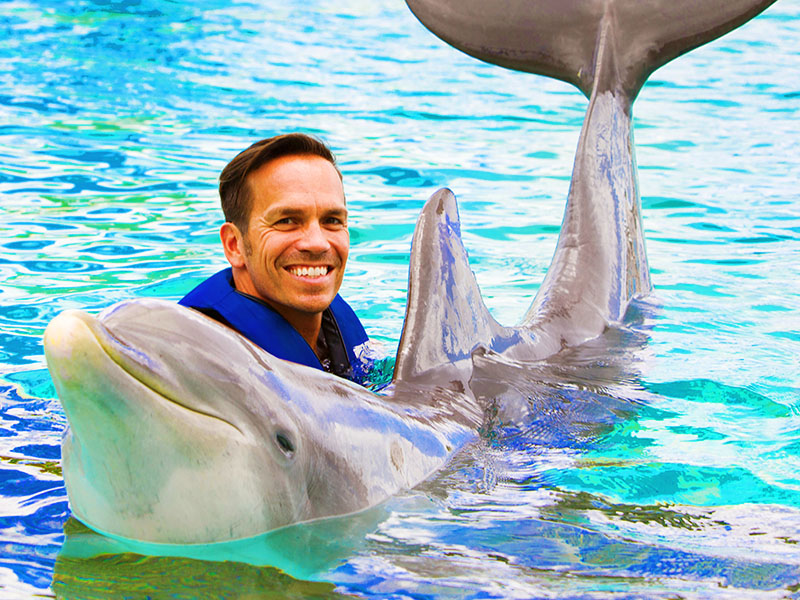 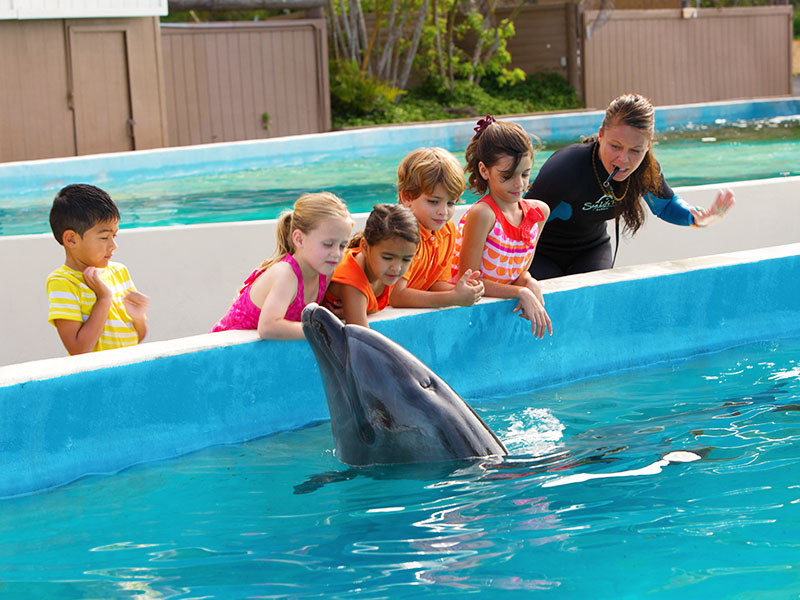 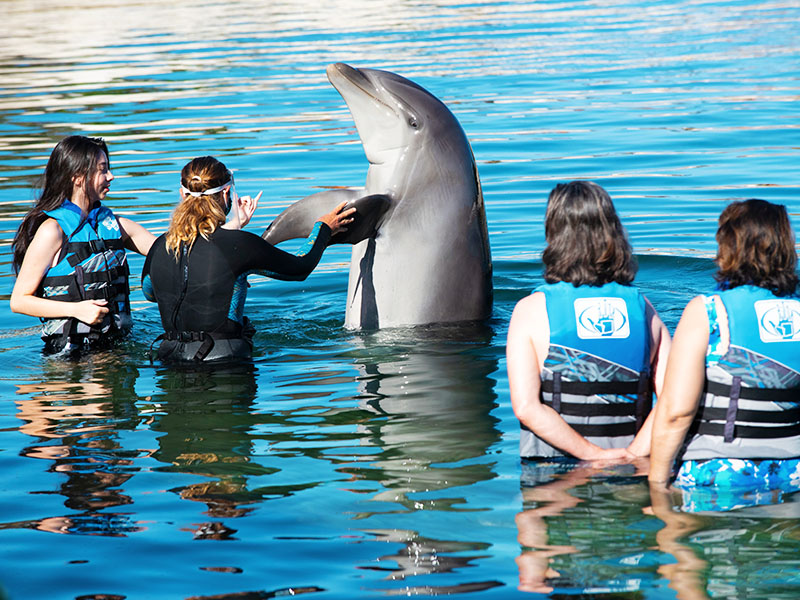 There Are 2 Types of Cetaceans

The first are the toothed-whales, called odontocetes. These cetaceans have cone or spade shaped teeth that they use to capture their prey and swallow them whole. The next type is the baleen whales, called mysticetes. These cetaceans have thick hair/brush-like teeth called baleen that they use to filter out small animals from the water column. In the wild, toothed whales (such as the Orca) tend to be smaller than baleen whales (such as the Blue whale). Also, all toothed whales have one blow hole on the top of their head whereas all baleen whales have two blow holes! So if you’re ever in a boat or helicopter looking at a cetacean from above count the blow holes and that will tell you whether the whale has cone shaped teeth or baleen. Baleen is made out of keratin, which is the same substance found in human finger nails and hair! There are many of species of whales that have baleen such as the massive Blue whale, the Right whale, and the Humpback whale.

Bottlenose dolphins are not fish; they are mammals like you and I. There are 5 main characteristics that make them mammals. They are warm blooded. This means that they can regulate their body temperature to a stable 99 degrees Fahrenheit. Just like you and I, no matter what the temperature is outside, our bodies stay at a stable temperature. The second characteristic is that dolphin’s breathe air with their lungs through their blowhole which is located on the top of their head. Dolphins can hold their breath for an average of 7 to 8 minutes. Bottlenose dolphins also give birth to one calf about every 3 years, and the calf will nurse from its mother for 2-3 years before it ventures out on its own. Dolphins’ milk is very rich and is 33% fat! They need this in order to build their blubber, or fat layer. Since the ocean water can get cold, they need this blubber layer to keep themselves warm. Lastly, when they are born, dolphins have small hairs on their rostrum (upper jaw and nose) that will fall out as they age.

There are many adaptations that cetaceans have to allow them to survive underwater. They have a torpedo-like shape that allows them to streamline through the water, as well as a dorsal fin, pectorals flippers, and caudal fin to help keep balance, steer, and propel them through the water. Fish move their tails from side to side while cetaceans move their tails up and down to propel themselves forward.

The dorsal fin of a bottlenose dolphin is located on the dolphin’s back and is used for stability, to release excess heat from the body, and to identify different dolphin’s out in the wild. The dorsal fin is easily scarred and comes in a variety of shapes and sizes based on the type of dolphin so that is how it is used to identify different dolphins in the wild. The back fin, or the fluke, is a strong muscular tail used for powerful upward strokes and forward motion. Now both of these fins are filled with connective tissue, but the pectoral flippers, which are located on the side of the dolphin and are used for steering, have bones similar to our arm, wrist, and hand. A dolphin’s eyes are well-developed and are placed on the side of the head for 360 degree vision. They have an elongated nose, called the “rostrum” with an upper and lower jaw that contain 88 cone-shaped teeth. Dolphins have a blowhole that is directly connected to the lungs. This respiratory system is 63% more effective than a human, which allows them to dive to deeper depths. Their airway and feeding tubes are completely separate, so dolphins do not have a gag reflex like humans do.

Some cetaceans, such as killer whales and Atlantic bottlenose dolphins use a form of camouflage called counter-shading to hide from their prey and predators. If a predator or prey is swimming below them and looks up, the white belly of cetaceans will blend in with the clouds and sky above; now if that predator or prey is swimming below them and looked down the black or darker back would blend in with the ocean floor below. One last unique adaptation that toothed-cetaceans have is called echolocation.

Bottlenose dolphins are the most well recognized species of dolphin because of their roles they have played in television shows, movies, and aquariums. They are very intelligent and fun animals and do a variety of behaviors such as tail slapping, breaching, chasing one another, using sea-weed and sponges as tools, and comprehending language. A bottlenose dolphin’s life expectancy is 40-50 years and their average size is 6-12.5 feet long and 300-1400 pounds. Dolphins also eat a variety of different animals such as fish, invertebrates, shrimp, and other crustaceans. Here at the park we feed our dolphins Herring, squid, and capelin.

To locate food in the open ocean, dolphins will send air from the lungs through the blowhole and out of their forehead (that is filled with fats) via a cone-shaped beam. That beam will hit an object and return and echo back to the dolphin’s lower jaw (also filled with fats) that is sent to the dolphin’s brain to be processed. This is an amazing adaptation, and all toothed-whales, such as Killer Whales and Beluga Whales, use this to locate their food.

Besides using echolocation, and having very efficient temperature regulation and respiratory systems, dolphins also have a few more adaptations that allow them to thrive underwater. (Bring out rubber skin) Dolphin’s have a torpedo-shaped body and sleek skin, such as this rubber sample, that allows them to swim more efficiently. Their backs are a darker grey whereas their bellies are white. This is a form of camouflage called "counter-shading" that allows them to hide from predators by blending in with the ocean floor as well as the sky above.

Out in the ocean, Killer whales and some species of sharks such as Tiger sharks and Great White sharks will prey on dolphins but the number one predator of any marine species are humans! Dolphins are accidentally caught in fishing nets, run over by boats, and confused by underwater sonar; but a major issue affecting all marine species right now is marine debris. Marine debris is just a fancy word for our trash ending up in the oceans and it kills over 100,000 marine species a year! Even though it is a major issue there are many things that you can do to help prevent the endangerment of dolphins as well as other marine animals. The first thing you can do to help is by educating yourself so you can also educate your family and friends. Get involved in beach clean ups with your community as well as know your local communities laws and regulations put into place for protecting marine animals! Even if you don’t live by a beach, cleaning up trash and recycling your plastics helps in a major way worldwide. Practice the 3 R's-Reduce, Reuse, and Recycle, and refrain from swimming with or feeding a dolphin out in the wild. This can lead a wild animal to become too comfortable to humans which can be harmful to their safety and to yours.

There are different methods and forms of feeding that they do, such as bubble netting and gulp-feeding (shown here). Bubble netting is just what it sounds like, where a group of humpbacks will dive down to schools of krill where one whale (the bubble-blower) will release a ring of bubbles from its blowhole as it spiral beneath the prey. As this air rises to the surface, it creates a curtain of bubbles that acts as a physical barrier to frighten and retain the krill. Simultaneously, another whale in the group will produce vocalizations, which also act to frighten the prey and trigger them to school up in tight balls within the bubble net. The whales then lunge, mouths open, to the surface through the center of the bubble ring, or bubble net. This motion drives the krill to the surface, where they are trapped from all sides and allows the humpback to open its mouth and sieve the krill through its baleen.

What Is the Difference Between a Dolphin and a Porpoise? 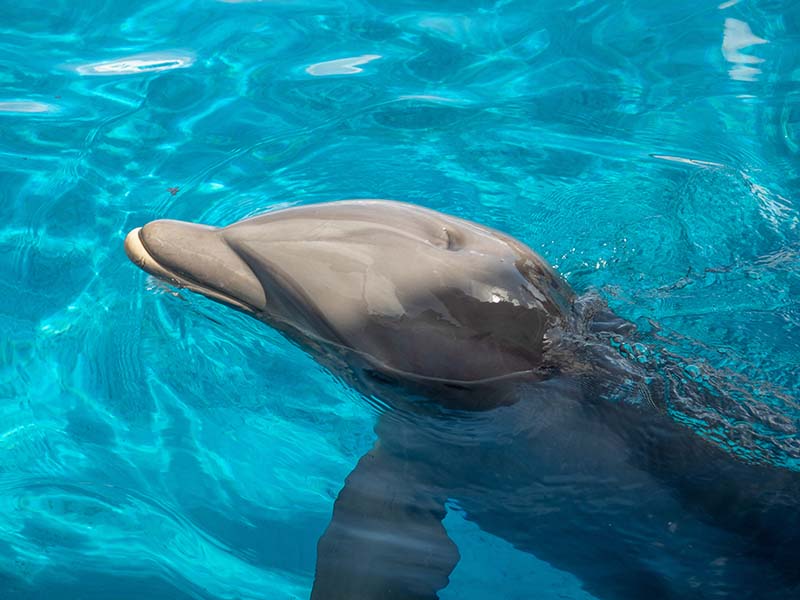 Yes! However, dolphins and whales have to sleep slightly different than you and I because they are voluntary breathers, which means their brain has to actively think about taking a breath. That’s different than you or I because we don’t have to constantly be telling our brains to breathe. So when they sleep they have to rest by using one half of their brain at a time so that they are always breathing.