Sea Life Park is home to the only active breeding colony of green sea turtles in the entire United States. This means that the sea turtles you see here reproduce every season. Every year after mating the females go up on to that sandy beach and lay their eggs, or clutch. They can lay up to 5 clutches per breeding season. Each clutch can have anywhere from 60-120 eggs. After about 60 days and then we collect the hatchlings and release them into the ocean. So far here at Sea Life Park, we have released over 17,000 baby sea turtles! Some juvenile turtles from the park can be seen at other educational facilities throughout the islands and part of the educational and outreach programs we have through our partnerships and loan programs. Before being released to the ocean we “PIT” tag the hatchlings where they receive a microchip in their back flipper. These tags provide a permanent method of identifying and tracking the turtles that we release so we can further collect data on where the turtles are heading.

How Long Do Sea Turtles Live?

These sea turtles were donated to Sea Life Park Hawaii in the 1970’s, so we estimate that they are at least 60 years old; but may be as old as 70 or 80. Green sea turtles live to be anywhere between 80 to 100 years old. 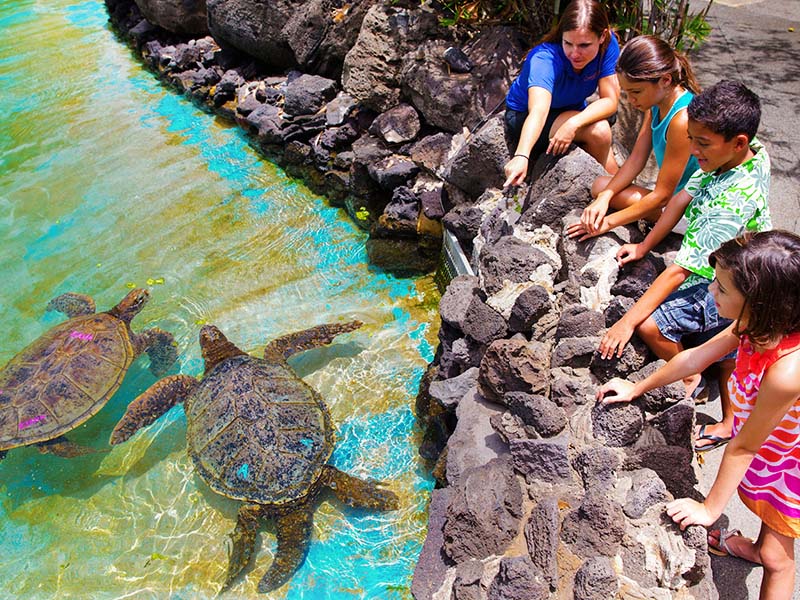 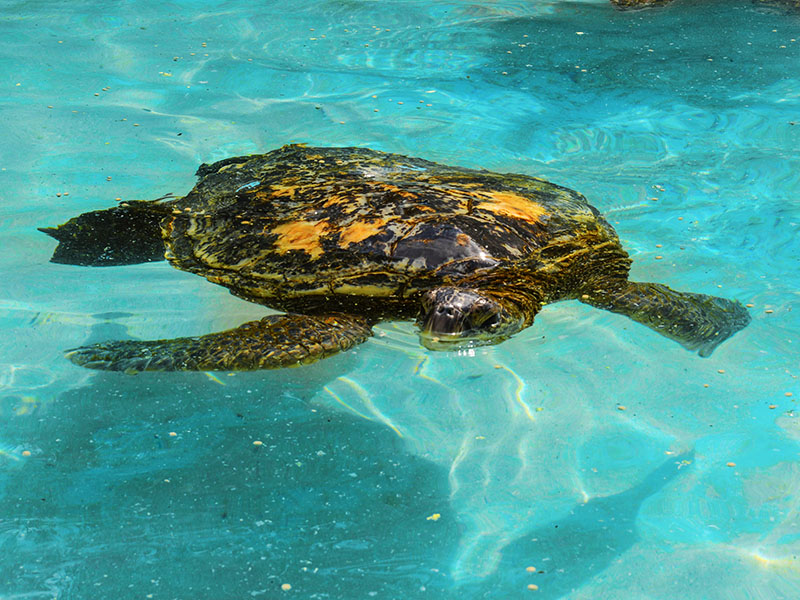 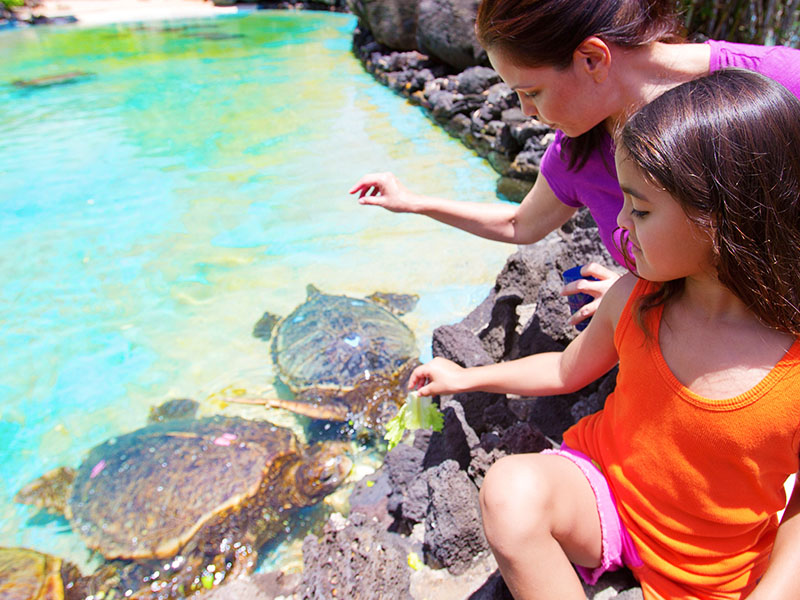 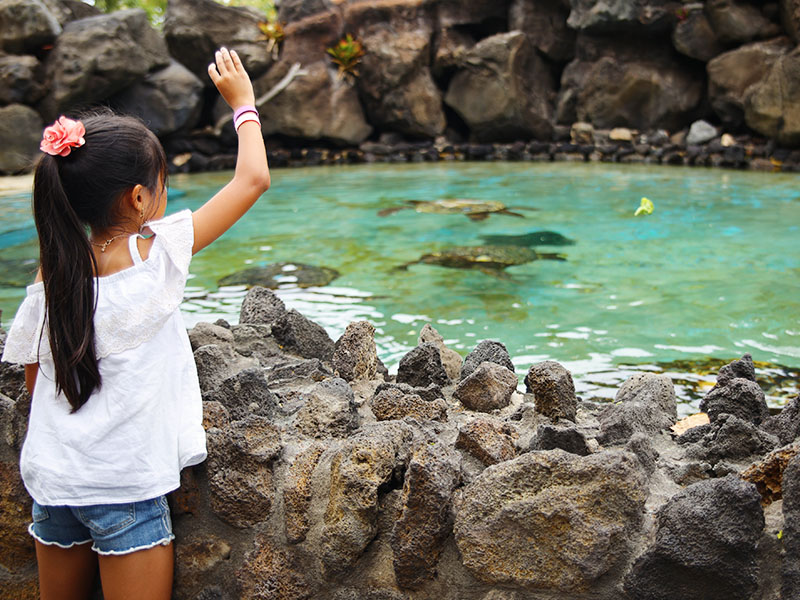 How do green sea turtles (known in the Hawaiian language as honu, scientific name chelonia mydas) get their name? From what they eat, or their diet! Adult green sea turtles are completely herbivorous, or vegetarian. They eat algae, or seaweed, off of the coral reef. They eat so much green stuff that their subdermal layer of fat, inside their body is stained green in color.

All sea turtles have different patterns and colors on their shells. Our turtles may look different than wild turtles that you see because their shells are kept clean from being scrubbed. However, when sea turtles first hatch from the egg, they are a dark grey almost black color.  If you get to see one of the juveniles at our touch pool today you will notice this color difference. When a Hawaiian green sea turtle hatches it is about 2 inches and weighs around 1 oz.; which is about the size of a golf ball! On average, they can grow to have a shell length of 36 inches and weigh about 250lbs.

What Are the Characteristics of a Turtle?

They have backbones: Their backbone is attached to their shell!

They breathe air: Sea turtles breathe air. They have lungs similar to humans. Honu have a special ability to lower their heart rate. This allows adults to hold their breath for up to 2 hours.

They have scaly skin: Even their shell is made up of modified scales called scutes. Hawaiian Green Sea Turtles have 13 scutes!

Green sea turtles do not have teeth; however they have a beak with a very sharp jagged edge. This allows them to scrape the algae off of the reef and off of rocks. Moving down their body, they have specially modified front flippers that help them swim, while their hind limbs enable them to steer. The shell of a green sea turtle consists of two parts, the carapace and the plastron. The carapace is the top or back of the shell and is covered with 13 scutes, or scales, on average. The underside of a turtle is known as the plastron. You will notice that the belly of the sea turtle is a lighter color. This is a type of camouflage called countershading, so their dark carapace blends in with the dark ocean floor; and the lighter plastron blends in with the sky and light coming in from above. This countershading helps to protect them from predators.

This habitat, like all of our habitats at Sea Life Park, contains real ocean water. Sea Life Park pumps about 12 million gallons of fresh sea water through our habitats every day. We do not put any kind of chemicals into that water, so algae grows naturally in our habitats. This algae called diatoms actually absorbs harmful sunlight and produces atmospheric oxygen.

This algae may also grow on sea turtles. It can be seen on their scales or shell. In the wild, sea turtles visiting something called a cleaning station, which is a place on the reef where fish come and eat the algae off of the sea turtle. The turtle is getting clean, and the fish is getting fed; this is what is called symbiotic relationship in which both animals benefit from the partnership. We do not have those fish in our habitat, so twice a week we drain the habitat and our staff scrub the sea turtles clean!

Only about 1 in 1,000 sea turtle hatchlings survive until maturity. What kinds of dangers do you think they face as the make their way from their nest to the ocean? Threats to green sea turtles include crabs, seabirds, heat from the sun, humans, and several other threats; but if they make it to the ocean the threats don’t end there. Sharks, large fish, and human interaction such as nets and marine debris also threaten their pelagic lifestyle. When sea turtles first hatch, they make their way out into the open ocean and spend 4-10years there. This is called their pelagic life style. A pelagic lifestyle is where a turtle will float around at the surface of the water, and will not typically be seen until it returns to the nesting beaches as an adult. During this time, the juvenile sea turtle is an opportunistic feeder, which means that it eats whatever it can find. They may be eating squid, fish, or anything floating on the surface of the ocean. Our juvenile sea turtles are fed krill, squid, and fish like ahi.

Hawaiian green sea turtles were listed as endangered, however due to being protected by Hawaii state and federal law as well as the Endangered Species Act; their status has now been moved to threatened. This is better, but our goal is to get them off of this list completely. Therefore, you should not threaten, hunt, feed, or harass green sea turtles in the wild. Hawaiian green sea turtles have been known to come up on to the beaches; and it is very important to leave them alone when they do this, so that they can get the rest and warmth that they need to survive. Unfortunately, disease, marine debris, and net entanglements also threaten these turtles. What is marine debris? Marine debris is our trash that ends up in the ocean. 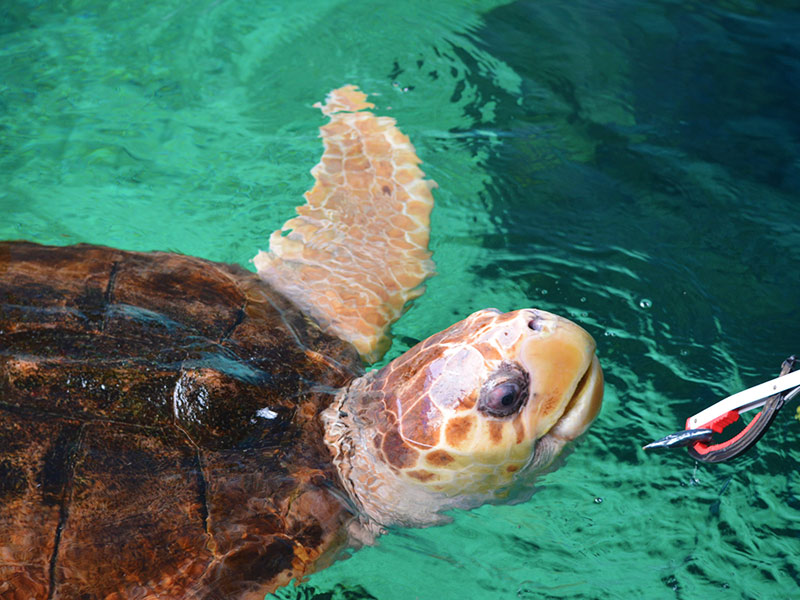 How You Can Help

For all of these threats to green sea turtles, you can help by picking up your trash; and even taking it a step further by picking up someone else’s trash to reduce the amount of marine debris found in our oceans. If you see a turtle in distress you should not attempt to come to the turtle’s aid; instead you can call the appropriate agencies to assist with turtles locally.