Born out of a community need in the early 1970s and fostered through a labor of love with support from Park staff and volunteers since, the Sea Life Park Seabird Rehabilitation Facility has been helping native seabird populations and educating the public on the signs to look for in distressed seabirds. Federally protected Wedge-tailed and Newell’s shearwater chicks are particularly vulnerable following breeding season, and the Park assists hundreds of seabirds during these peak months alone with a highly successful release. The facility is equipped to receive injured seabirds 24 hours a day, seven days a week, and is the primary rehabilitation facility on Oahu. In one season alone; Sea Life Park Hawaii took in, rehabilitated, and released over 800 sea birds and since 2005, over 4,000 seabirds have been rescued and released. Birds that are unable to be released are provided a home at the Park’s Seabird Sanctuary.

In the heart of the Sea Life Park campus is the Seabird Sanctuary. In this enclosure of about 500 square feet, you will find a place of refuge for injured Hawaiian seabirds that, according to U.S. Fish and Wildlife Service (USFWS), are not able to be returned to the wild. 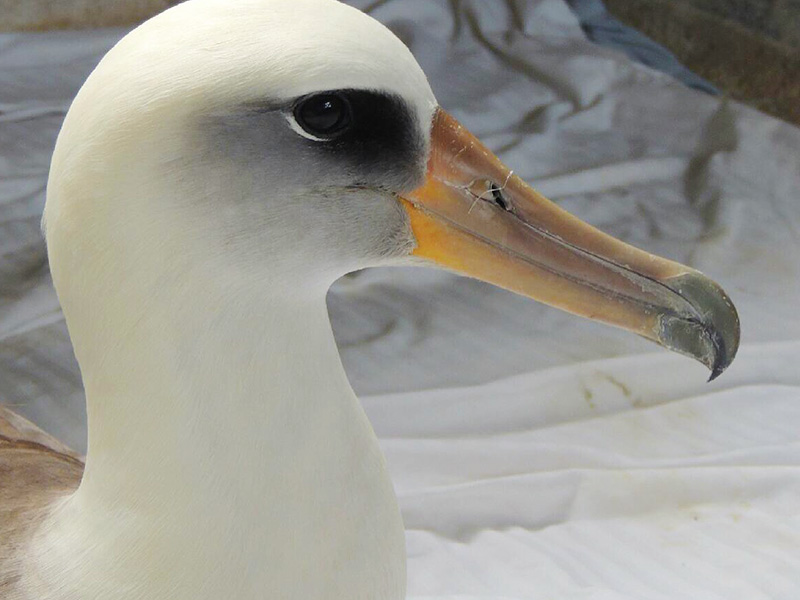 Federally protected Wedge-tailed and Newell’s shearwater chicks are particularly vulnerable following breeding season, and the Park assists hundreds of seabirds during these peak months alone with a highly successful release rate. The facility is equipped to receive injured seabirds 24 hours a day, seven days a week, and is the primary rehabilitation facility on O'ahu. These include the Black-footed Albatross, Hawaiian Petrel, Laysan Albatross, Newell’s Shearwater, along with many more. When looking at the anatomy of these different birds, we can see similarities that all these different species share.

Feather color: Most seabirds have feathers that are dark above and light below. This type of coloration, called countershading, camouflages them from predators in the sky, and hides the bird from prey beneath them.

Feathers: Seabirds have more feathers relative to their body size than other birds, which help them keep warm and stay dry.

Feet: Most seabirds have flexible webbed feet that help them be powerful swimmers. Some species even have strong claws on their feet to help with fishing.

Salt glands: Many seabirds have special salt glands that remove salt from the birds' food and water, allowing them to eat and drink without absorbing too much salt. The salt that has been removed is then excreted out of a hole near the bird’s nostrils.

Head structure: In order to be able to dive directly into the water, seabirds that hunt deeper in the water have different skull features. These features include strong, tapered bills, air sacs and thicker bones.

Nesting behavior: Even though most of their lives are spent at sea, all seabirds return to land to breed. Seabirds are unique in their nesting habits. Nesting sites of seabirds include extreme habitats such as Antarctic icebergs, the tops of mountains, tundra, and remote islands.

Petrels and shearwaters may variously nest in simple scrapes on the ground, on cliff ledges, in a burrow or in a rocky crevice.The red-footed booby nests in trees and shrubs. The Albatross prefers to nest in holes on the ground where nest material is available, and build large bowl-shaped nests of grass and mud. Terns are famous for laying their eggs in the forks of small thin branches without using a nest. Some seabirds nest in large groups called colonies. Unlike land birds, parental duties are shared by both parents.

Each year we have what is called a shearwater season where hundreds of fledging shearwaters are disorientated by lights at night, have trouble finding food, or are attacked by cats, dogs, or mongoose. The season runs from November to the beginning of January. People will find the birds and bring them to us to be rehabilitated. Shearwaters make a low crying sound, and are often called the moaning bird. Shearwaters make burrows on the ground and in bushes. They are commonly found on the off shore islands surrounding Oahu.

Red Footed Booby
They are easily identified by their red feet and blue beak. They nest in trees and shrubs.They are plunge divers, which is why they have long sharp beaks.

Brown Booby
Brown Booby birds are slightly larger than the Red Footed Booby.They can usually be spotted off the coast of Waikiki and Kaneohe.

Great Frigate
The Great Frigates are sexually dimorphic, meaning you can tell whether it’s a male or female just by looking at it. The males are all black with a red inflatable throat pouch. The females are black with white chests. They have a 6 foot wing span. Their Hawaiian name is ‘Iwa which means thief. They get this name because they harass other birds into regurgitating their food and then they steal it. They lack the webbing on their feet, so they cannot land in the water and then take off for flight. 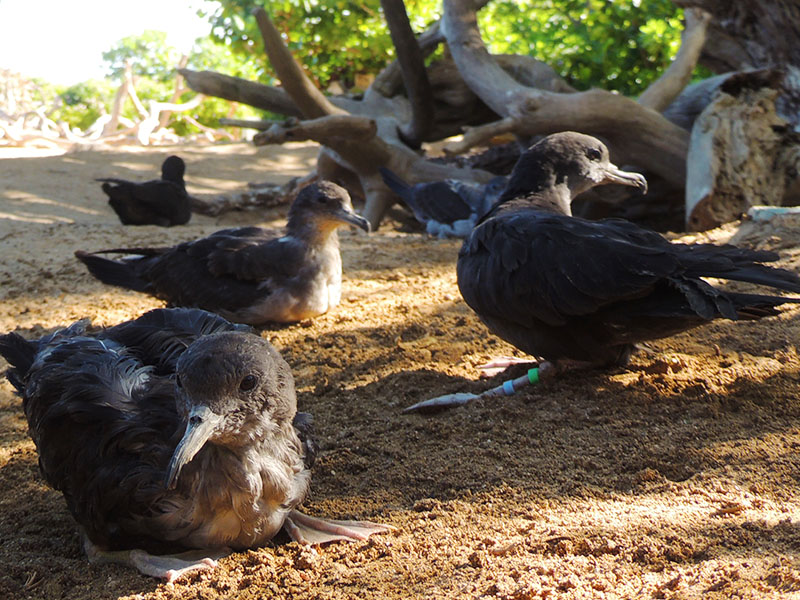 We can all do our part to help out these birds in the wild by following the three R’s, reduce, reuse, and recycle. Each year, an estimated 5 tons of plastic is being fed to sea bird chicks that the parents mistook for floating fish eggs or squid.

On the island of O'ahu, there are special places that are only reserved for seabird nesting sites. One is “Rabbit Island” right across the road from here. Ka`ena point is another area on the island that is a protected area for seabird nesting. The birds that primarily nest here are the Laysan Albatross and Wedge-tailed Shearwater. Birds can live here and make nests without being disturbed by people.

Albatross are colonial breeders and usually return to the same site/nest every year. One example is a well-known albatross named Wisdom. She is the oldest known bird in the wild, estimated to be at least 66 years old. She has been spotted at the same nesting site since 1956. We generally take in 300 to 800 seabirds a year. We are usually able to release 75 to 85 percent of the birds back into the wild.