What Makes a Fish a Fish?

Gills: In order to breathe, we use our lungs to bring oxygen into our bodies. In the same way, fish use gills. The gills take the oxygen out of the water and bring it into the body of the fish.

Scales: Scales provide protection for the fish against diseases and infections and some predators. Scales cover the body, overlapping, kind of like shingles on a roof. This provides protection like a flexible suit of armor. The scales also make the fish more slippery and slimy, which makes them more streamlined and difficult to catch. Every fishes scale is unique to that species so, if you were to find some fish scales, you would be able to tell what kind of fish it was, just by examining the scales. You can actually tell the age of a fish by looking at its scales. The concept is similar to counting the rings of a tree trunk to see how old it was. There are rings on the scales of fish which show the growth of the fish, which enable us to estimate the age of the fish.

Vertebrate: The presence of a backbone makes an animal a vertebrate. Fish too have backbones so that makes fish vertebrates. Sharks are cartilaginous fish that have backbones made out of cartilage-that tough flexible material that makes up our ears and parts of our nose. Because sharks are cartilaginous, this means that they do not have any bones in their body, except for their jaws.

Swim Bladder: The swim bladder of a fish looks like a small balloon which helps the fish to control its buoyancy or ability to float and move up and down within the water. It is able to take air from its bloodstream to fill up the air bladder. This allows the fish to rise. The fish is also able to deflate its swim bladder to sink to deeper depths. Sharks do not have swim bladders however. Many sharks have to constantly swim around and move in order to keep the flow of oxygen running through their gill slits. Other sharks are able to pump water over their gills and rest on the ocean bottom such as the White tip reef shark, the lemon shark and the nurse shark.

Fins: All fish have fins. Fins help the fish move through the water. Fins are used for steering and movement. 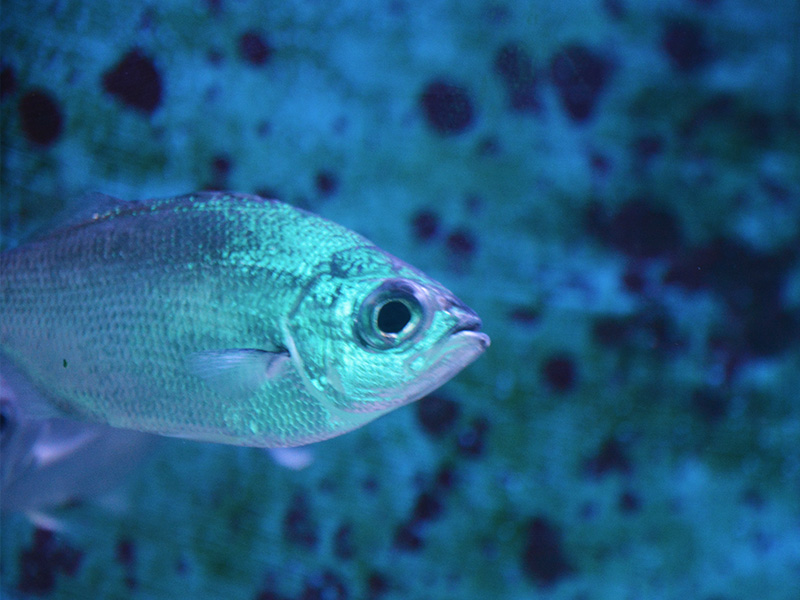 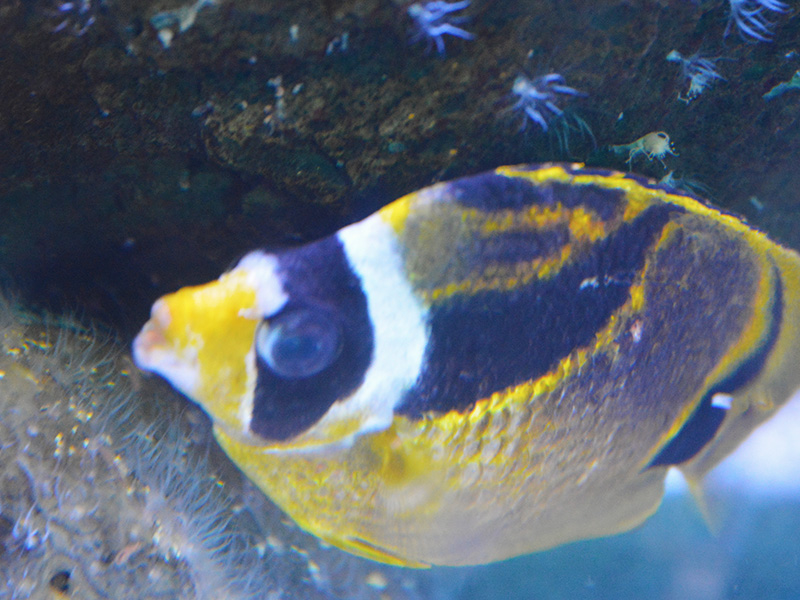 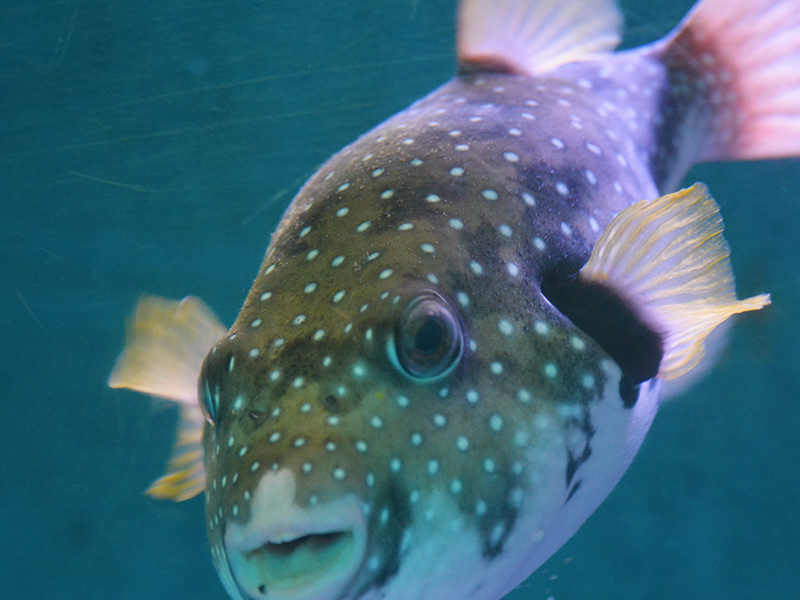 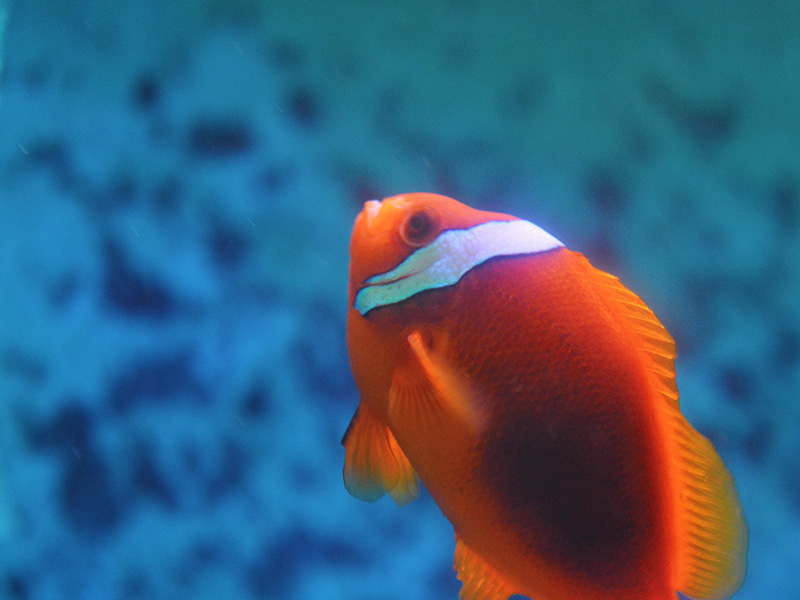 Eyes: Fish have eyes, which enables them to see well underwater. What do we have that protects our eyes and keep them moist, so they do not dry out-eyelids. Do fish have eyelids? Actually most fish do not have eyelids, but sharks do. They have what is called a nictitating membrane, which is a tough membrane that protects the eyes from the bones and debris that may cut into their eyes as they are feeding.

Mouths: Fish have all different shapes of mouths. Some have large mouths, some very small. For fish, and for most animals, the shape and size of their mouths depend on the type of food they eat. For example, if you noticed the stingray’s mouth is on the bottom of their bodies. This is because they feed on animals living on the ocean floor. The Moorish Idol has a long and small mouth. This is because they feed on sponges that are sometimes found in rock crevices. Sharks usually have very large jaws, with many sharp teeth.  There are many rows of teeth, this is because sharks have a special way to replace their teeth. When sharks eat, they thrash around when tearing at their prey, and they are constantly losing teeth. When they lose a tooth, the one right behind it simply moves up in its place. The shape of the tooth is also dependent on the shark’s diet.

Gills: The gills are used to get oxygen out of the water. The fish gills are covered by a bony plate called an operculum. Sharks do not have an operculum, but they do have gill slits. Most sharks have 5 gill slits. Sharks along with stingrays also have a modified gill called a spiracle that is right behind the eyes. The spiracle takes in water for breathing when the mouth is being used for feeding. On stingrays, the gills are on the bottom and the spiracle is on the top. The reason for this is because stingrays are bottom dwellers, and are often buried in the sand and only their spiracles are exposed for breathing, another wonderful adaptation.

Fins: The dorsal fin is used for stability so that the fish isn’t rolling as it swims through the water. Some fish will have spines near their dorsal fin that they use for protection. The pectoral fins are on the side and are used in some, for movement, and also for turning and stopping. Another very important fin is the tail fin or caudal fin. This fin provides power when swimming. Tails of fish are all shaped differently. By looking at a fish’s tail, you can tell what kind of habitat they live in. Fish with the forked tail such as the shark and weke or goatfish, are fast swimmers, and are found in the open ocean. Those fish with the more rounded tails like the Humuhumunukunukuapua’a are slower swimmers and are likely to be found near the reefs where they have more places to hide.

Scales: Scales are overlapping plates that protect the fish. Sharks do not have scales like other fish; they have modified scales called dermal denticles which mean tiny skin teeth. These dermal denticles help to make sharks more efficient swimmers, and also allow them to swim silently through the water compared to other fish that generate quite a bit of noise when swimming through the water. They are better at the sneak attack. If you were to feel a shark from head to tail it would feel smooth, but if you went from tail to head it would feel like sandpaper. When you feel a real fish, it feels slimy. This slime is used for protection, because it makes the fish that much more difficult to catch and hold onto. It also helps to streamline the fish as it swims through the water.

Lateral Line: You may notice that fish have a line running across their body from head to tail. This is called the lateral line. This is a sensory device that enables the fish to detect any movement in the water. This helps the fish find food and avoid predators.

Countershading: or having a light underside and dark top allows sharks and some fish to blend into the ocean and sneak up on their prey.
Mimicry: Some fish have mimicry colors and are able to make themselves resemble or imitate other species which protects them from unwanted predators.
Warning coloration: These are usually bright colors that announce danger to potential predators.
Disruptive coloration: These are color patterns break up the shape of the fish and make it difficult for a predator to catch the fish.

As far as body shape there are the fish that are:
Fusiform: or torpedo-shaped, is a shape that means streamlined and is typical of fast swimmers like the shark.
Compressed: or flat from side to side making the fish look tall and thin aids in short bursts of speed like the butterflyfish.
Depressed: which means flattened from top to bottom for flight type swimming such as the stingray.
Filiform: or long and skinny for snake like swimming as you can see in the eel.

All of these different body shapes serve a purpose for fish, allowing it to live successfully in its habitat.