Hawaiian Monk Seal Habitat will be under renovation from November 11 until further notice.
Pardon for the inconvenience as we improve the area.

Seals, along with Seal Lions, and the Walrus; belong to the family called Pinnipeds.

Some of the biggest threats to the Hawaiian monk seals today are shark attacks on juveniles, limited foraging success or starvation due in part to over fishing, marine debris (entanglement and ingestion), male mobbing of females; in this unusual behavior the male seals will “gang up” and kill females and young seals for no apparent reason, human disturbance such as harassing, feeding, boats, fishing hooks and others. 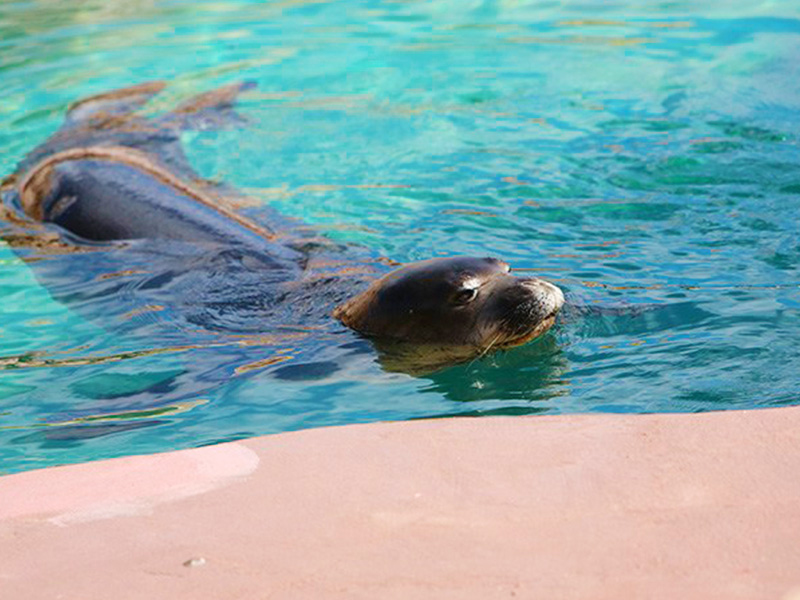 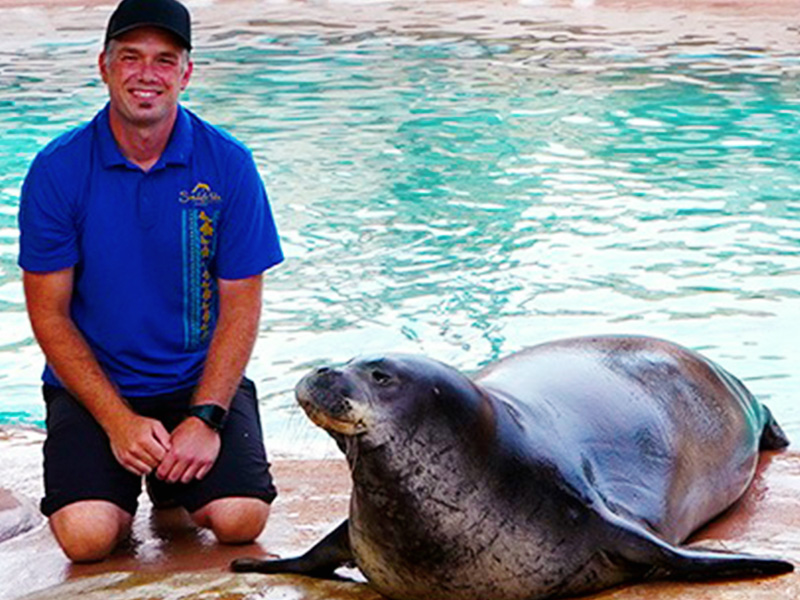 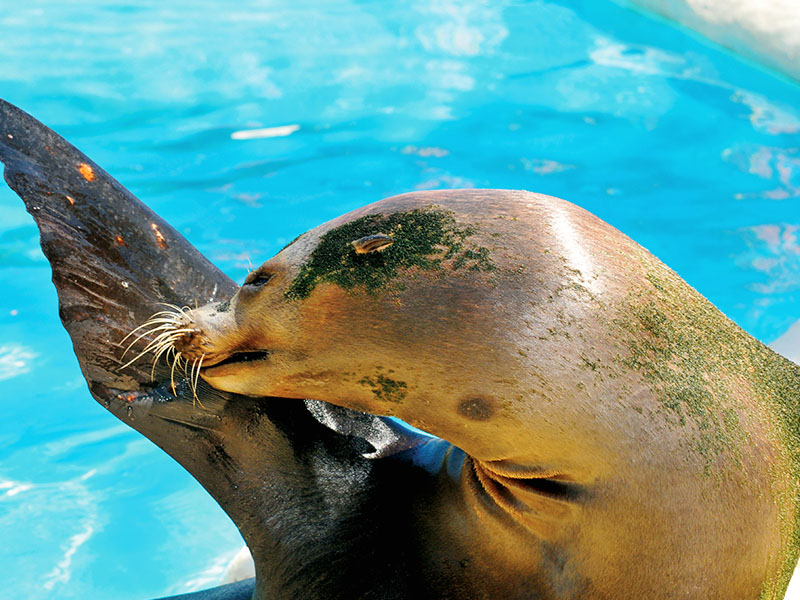 There are a few key characteristics that make seals different from sea lions. First of all, seals do not have ear flaps; they only have small holes for ears. Also seals use their hind flippers to propel themselves through the water and their front flippers to steer; with sea lions, it is the opposite. Also seals cannot prop themselves up on those front flippers, so they can only haul around on land like an inchworm. Pinniped means fin, or flipper, footed. All Pinnipeds are Mammals.

What Are the Characteristics of a Mammal?

Hair/fur: Their fur helps to keep them warm. You may notice that sometimes monk seals have green growing on their fur. This is algae! It grows naturally on monk seals in the ocean. Each year, monk seals shed the top layer of their skin along with their old fur coats in a catastrophic molt. This lasts approximately two weeks (NOAA). During the molting process the old layer of fur and skin begins to peel off, revealing a nice new fur coat underneath. A freshly molted monk seal will have a light black and gray top coat, and a beautiful silvery belly. This habitat, like all of our habitats at Sea Life Park, contains real ocean water. Sea Life Park pumps about 12 million gallons of fresh sea water through our habitats every day. We do not put any kind of chemicals into that water, so algae grows naturally in our habitats. These algae called diatoms actually absorb harmful sunlight and produce atmospheric oxygen.

Drink Milk: Sea lions and seals also have blubber that helps keep them warm besides their fur. In order to build up their blubber quickly, a monk seal’s milk needs to contain a lot of fat.

How Much Do Monk Seals Weigh?

Male monk seals typically weigh between 400-500 pounds and female monk seals generally weigh 400-450 pounds, but can reach up to 600 pounds during pregnancy. The gestation period is approximately one year, and occurs on average every other year starting at 7-10 years of age. Pups are born on the beach with the mother staying with the pup for approximately 5-6 weeks in order to nurse. During the nursing period, the mother will not leave the pup to eat and eventually will lose up to 50% of her body weight; and the pup will gain about 4 times its original birth weight, reaching a weight of approximately 140 pounds. After the 5-6 week nursing period the mother will return to the sea to find food and leave the pup to fend for itself. During the weaning process, the pup must learn to catch its own prey, and the pup will steadily lose weight only about 100 pounds around 1 year of age.

What Do They Eat?

Hawaiian monk seals are opportunistic feeders, so they go after whatever is easiest and most available for them to catch. Their prey includes a variety of fish, crustaceans, eels, octopus and shellfish; all of which are found close to the sea floor. Monk seals do not chew their food like we do, instead they swallow their food whole! Monk seals have 32 teeth and an extremely strong jaw that they can use to crush the bones and shells of their prey.

Finding food is one of the monk seals greatest challenges, and sometimes they may have to dive to great depths to find their next meal. The greatest recorded dive depth was 543 meters, or 1781.5 feet, which was documented by video from a small submersible submarine. While diving and foraging, monk seals have the ability to stay underwater for up to 25 minutes with the average dive being 6-7 minutes.

How Do Monk Seals Get Their Name?

It is from their fur coat that many believe the monk seal got its name. It is believed that the monk seals fur around its face mimicked the look of a monk’s robe. Another possible origin for the name is that the seals lead solitary lives, much like monks do. When it comes to animal trainging, we use a technique called “operant conditioning”. This training method enables us to train the animals to undergo numerous medical and husbandry behaviors. These behaviors provide us with a method of closely monitoring her health status, thereby providing optimal care. These behaviors allow us to collect blood samples, body weight measurements, and complete physical inspections of the body, mouth and eyes. 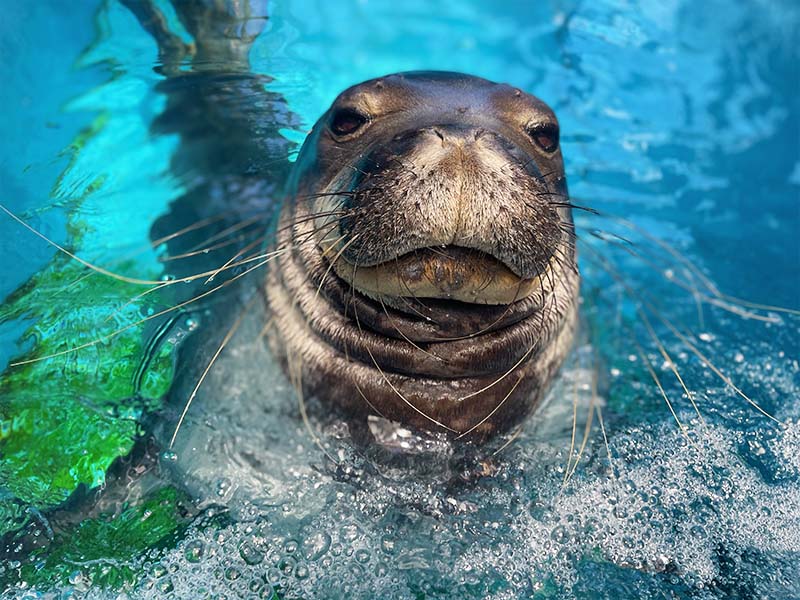 Since the Hawaiian monk seal is an endangered species, they are federally protected under the endangered species act. It is considered a federal offense to touch, feed, or harass a monk seal in any way; doing so could result in fines. Monk seals spend a lot of time on the beach basking in the sun. They will do this to rest, escape a predator, warm up, or get ready to give birth to their pups. If you ever happen to come across a seal on the beach, you want to make sure that you keep your distance giving them plenty of space. Another way that you can help to preserve this species is by making sure you never litter, and always remember to reduce, reuse, and recycle!

The Park has assisted endangered Hawaiian monk seals through an important program that brought in underweight or abandoned seals from the wild and rehabilitated them. Those crucial efforts—along with the impact of NOAA’s Hawaiian Monk Seal Recovery Plan and the work of other key agencies coming together to make a difference—are encouraging Monk Seal population growth.

“Lambchop” was a Hawaiian Monk Seal who resided at the park and passed away at age 32, following a sudden decline in her health from age-related kidney disease. Lambchop was brought to the Park extremely emaciated from the French Frigate Shoals in the Northwestern Hawaiian Islands in 1987. She was estimated to be about two years of age on her arrival, and was rehabilitated back to health under the Park’s care. The average life expectancy of a Hawaiian monk seal is 25-30 years. Lambchop was able to live a full life making many significant contributions that are helping the endangered monk seal population.

Over the years, Lambchop was involved in groundbreaking research—including important studies to measure monk seal metabolism and discoveries that would lead to the development of the morbillivirus vaccine currently being utilized on wild-populations. Morbillivirus is widespread and outbreaks of the disease have caused the deaths of tens of thousands of seals worldwide since the 1980’s. Due to Lambchop having access to 24-hour veterinarian care at the Park, we were able to conduct a cataract surgery resulting in the improvement of Lambchop’s eyesight; and through our daily physical exams, and husbandry training we have recorded that her vision continued to improve. She was able to benefit from procedures previously unheard of for her species, resulting not only in the improvement of Lambchop’s own quality of life but also breakthroughs in the care possibilities for other monk seals.